Thanks to Jodee DeSimone from Grand Junction, Colorado for this story!  Jodee also shared some of the pictures that she had of her house and the surrounding neighborhood.

There are many theories about what causes a haunting.  Some think a person’s immense unhappiness, unfinished business, or a refusal to detach from material objects can cause a soul to become earthbound.  Sometimes the circumstances surrounding the death, especially if it is sudden or particularly violent, may influence a spirit to stay behind.  In other cases, a spirit may not even be aware of the passage of time or that they have died.  Perhaps they may fear punishment for things that they have done or worry that they will be alone when they cross over.

Paranormal investigators, ghost hunters, Mediums, psychics, and other ghost fanatics are still trying to figure out what exactly causes a haunting and how to help spirits find peace.  Another answer they are seeking is why some places seem to attract more hauntings than others?  One possible reason is that certain areas may be portals for spirits to pass through during their travels.

Jodee DeSimone is a psychic Medium who lived in such a place for three years.  Built during the 1800s, the house was teeming with spirit activity.  It had three stories, but only two of them were accessible, as the entrance to the attic had been closed off by a previous owner.  All the bedrooms were located on one side of the house.  The house also had a creepy, unfinished basement where the family found a cat’s skeleton.

Two specific ghosts made their presence known to Jodee and her family.  One ghost was a little girl named Anna.  She liked to follow Jodee’s young granddaughter around.  The second ghost was a male who appeared as a tall, dark spirit wearing a top hat.  The little girl ghost, Anna, was afraid of him.  The tall man seemed to have some sort of control over the other spirits in the house as he would stop them from talking to Jodee whenever she tried to question them about why they were still there.

Things only became worse when the house next door to Jodee’s family was condemned and eventually knocked down.  The ghosts that were haunting that house moved into Jodee’s home.  Doors and cupboards would open and slam shut every night.  Lights would turn themselves on and off randomly.  The scents of coffee brewing, cigarette smoke, tobacco, and cooking would permeate the house at night, along with the echoes of ghostly conversations.  Sensing the spirits, the family dog would growl and bark throughout the night.

During their time in the house, the family was sick or got injured often.  Jodee even once felt someone push her off a chair while she was trying to hang a screen.  The house never stays rented for long.  Jodee has tried doing research on the house’s history, but is unable to find anything about its background.  For now, the reason for the hauntings remains a mystery. 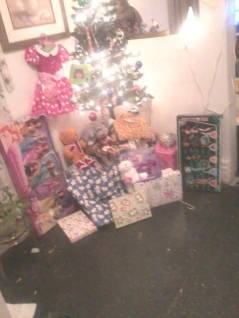 If you have a real ghost story that you would like to share with The Ghost Post, send an email with your contact information to Tara Theresa Hill at theghostpostreporter@gmail.com to set up an interview.

I’m always in the mood for a good ghost story!

One thought on “Too Many Ghosts”