This story was told to me by a friend who wishes to remain anonymous.  I have changed the names in the story for privacy reasons.

Paranormal investigators and ghost fanatics have many theories about spirits and the afterlife.  We scrutinize pictures, videos, voice recordings, and reports of eye-witness accounts for signs of hauntings.  While we may have different ideas based on our beliefs and experiences, we share a love for the exploration of the spirit realm and its mysteries.

One such theory is the presence of spirits around babies and young children.  Have you ever seen a baby or a young child carrying on a conversation, but you couldn’t see anyone next to them?  The child believes that this person is real and might even have a name for his or her friend.  Children are naturally more imaginative than adults.  Since they have not been conditioned to dismiss what others cannot see, they constantly live between the worlds of make-believe and reality.  While some may call it an “imaginary friend,” many in the paranormal field believe that there is a chance that this invisible person is either a spirit guide, guardian, or even a ghost.

Knowing that I love ghost stories, my friend recently told me about some things that are happening with her niece, Julie.  Ever since she was a baby, Julie has spoken to someone who none of her family can see.  Her parents would hear her moving around and making noise at two in the morning.  When they went to check on her, they would find Julie sitting up, clapping her hands, and babbling at a corner of the wall by her crib.  She did not look at her parents or involve them in this play.  Instead, she would keep up this game, all the while staring at the wall.  Then suddenly she would wave good-bye, roll over, and go back to sleep.  Although slightly concerned with this behavior, the parents figured she was just self-soothing by entertaining herself with a game until she was too tired to stay awake.

The family lives in a different house now.  Julie is two years old and learning to talk.  She still plays with this unseen friend, only now he has a name.  She has told her mommy and daddy that her friend is an old man named Jimmy.  Sometimes she wakes up in her bed and says that the “old man” scared her.  If her mom asks where Jimmy is, Julie will point out where she sees him.  Sometimes he is in her playroom, but other times, Julie will take her mother’s hand and search the house until she finds him.  She has also said that Jimmy is not here right now, but that he said that he would come back later.

“Jimmy” was the name of Julie’s great-grandfather.  He died before any of his great-grandchildren were born, so Julie never met him.  The mother has started experiencing some weird phenomena as well.  Sometimes when she is working in the den, the room will grow heavy with the scent of tobacco.  Neither she or her husband smoke.  However, Great-Grandpa Jimmy was a big smoker. 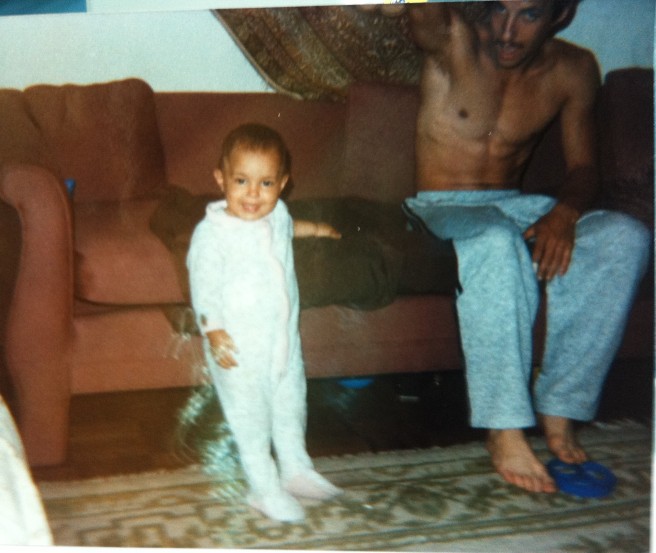 Photo: The above photo is a baby picture of me with my father.  The reason why I posted it is because you can see some mist or other light anomaly by my feet and next to me on the couch.  The pajamas did not have any reflective material like sequins on it.  Perhaps there was a spirit or two next to me?

If you have a real ghost story that you would like to share with The Ghost Post, send me an email to theghostpostreporter@gmail.com to set up an interview.

I’m always in the mood for a good ghost story!